The weaning is a challenging period for the piglet and the stressor factors involve, mainly, the new environment with new social interaction and change of diet. The pigs are handling and regrouped many times during their productive live (Martínez-Miró et al. 2016); however, during the weaning period, the consequences of this stress can lead to high production losses.

After the birth, the piglet is highly dependent on specific and non-specific immune factors present in maternal colostrum and milk (Stokes et al., 2004) and the commercial weaning occurs between 17 to 28 days of age, when the piglet immune system is still immature and their circulating antibodies reach the lowest levels (around 28 days). This period is called “immunity gap” or “post-weaning gap”, where the piglet is more susceptible to intestinal challenges because their acquired immune system has not had time to fully develop. After that, the antibody level gradually increases as the animal builds their own natural immunity.

At the same time, the piglet digestive system has some limitations, such as insufficient secretion of enzymes, hydrochloric acid, bicarbonate and mucus, factors that interfere with proper digestion and absorption of nutrients (Lallès et al., 2007). The stress of change from milk (high-digestible) to solid feed (less-digestible more-complex feed) can result in a decrease in feed intake and water. According to Brooks et al. (2001), 50% of weaned piglets consume the feed until 24 hours post-weaning, and 10% start to eat 48 hours post-weaning. The lower digestibility of the diet (depending on quality of the ingredients used), can be used as a substrate for pathogenic bacteria proliferation and result in health and enteric problems, such as diarrhea. In this period, the intestinal microbiota leads to dramatic changes in the composition during 7–14 days after weaning (Hillman, 2001) and should generate a resistance or competitive exclusion (Lallès et al., 2007).

The sows environment, nutrition, health status and general condition will have a direct impact over neonatal and post-weaned piglets, by direct impact in piglet development during the gestation, physical contact post-birth (transmission of microbiota) and colostrum and milk during the lactation. Colostrum has a high concentration of total solids and protein but only low levels of fat and lactose.

It also contains high levels of immunoglobulins (IgG, IgA, and IgM) and the concentration declines with lactation time (I-Fen Hung, 2015).

There are some other cells from the immune system in colostrum and milk, including neutrophils, lymphocytes, macrophages, and epithelial cells from mammary glands (Darragh and Monghan, 1998), and leukocytes which stimulates the development of cellular immunity of the neonates (Blecha, 1998). So, the sow health condition will have a direct impact on the passive immunity transmission.

The natural richest source in nucleotides and nucleosides is the human breast milk, the second is sows colostrum and milk. Although the nucleotides are not considered essential nutrients, they play an important role in several metabolic processes, in particular, in some body tissues and stages of animal life. The free nucleotides and nucleosides can be readily absorbed by the enterocytes in the intestine, and are especially important in tissues of rapid cell proliferation and limited capacity for de novo synthesis (major route of nucleotide production), such as intestinal epithelial cells, blood cells, hepatocytes and cells of the immune system. So, the free nucleotides can be used by the salvage pathway, where the body can synthesize nucleotides with less energy consumption, as result of recycling bases and nucleotides from metabolic degradation of nucleic acids from dead cells or from the diet. However, when the endogenous supply is insufficient, exogenous (dietary) nucleotide sources become semi-essential or “conditionally essential” nutrients (Carver and Walker, 1995).

This especially occurs in animals in rapid growth phases (early stages), reproduction, stress, and disease challenges. As the health and nutrition of the sow are directly linked to piglet’s health and development, studies in the literature have been showing the benefits of feed additives that can have an impact over sows health and performance and their progeny. One natural alternative is the use of Hilyses®, produced by ICC Brazil that contains hydrolyzed RNA from Saccharomyces cerevisiae yeast. Saccharomyces cerevisiae yeast is used in the fermentation of sugarcane juice to obtain ethanol. After fermentation, the yeast cells undergo a process of separation and washing, following to autolysis of the cell membranes where the cellular contents are poured into the medium.

In addition, yeast RNA can be “broken” into smaller fractions, by some specific enzymes which are added, resulting in free nucleotides and nucleosides. This final product contains highly digestible amino acids, peptides and polypeptides of short chain length, and glutamine, so it is highly recommended for animal feed (Figure 1). There is also yeast mannan oligosaccharide (MOS, effective tool in preventing diarrhea caused by contamination of Salmonella and E. coli.), and high levels of β-glucans (immunostimulant, and activates the T-cells presents in the gut, triggering the activation of the innate immune system). 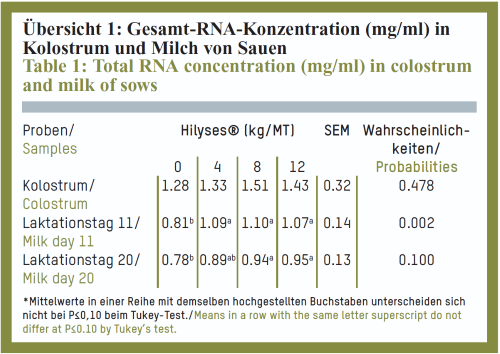 In order to understand the benefits of Hilyses®, Vitagliano et al. (2014) studied the supplementation in sows diets at four levels of inclusion (0, 4, 8 and 12 kg/MT) since three days prior the farrowing until piglets 21 days of age (at weaning). The number and body weight (BW) of piglets at birth were equalized by sow and treatment (number of piglets per sow: 10.48, initial piglet weight: 1.70 kg, litter weight/sow: 17.79 kg). Samples of colostrum and milk were taken to analyze the total amount of RNA present (Table 1).

Hilyses® can be used as a tool in sow’s diets combining the nutritional benefits helping in the transmission of nucleotides by milk and reducing mortality and improving the performance of piglets at weaning. However, Hilyses® also contains the intracellular content, which is fully available, for instance, offers high amounts of small chain polypeptides and free amino acids. 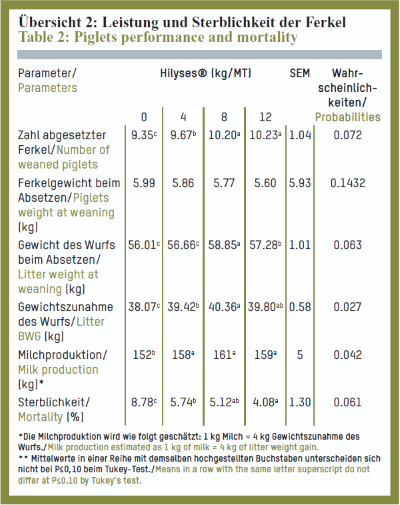 These nutrients are readily available for absorption in the gut and metabolism utilization. Among these amino acids, there are high levels of glutamic acid (glutamine and glutamate), which gives a large support to gut (as amino acid and energy source) and also has excellent palatability, leading to an increase in feed intake. The nucleosides guanosine monophosphate (GMP) and inosine monophosphate (IMP) also contribute to improving the palatability. Stimulating the feed intake, there is consequently a better resistance to the challenges and also a higher BWG. The benefits finding in supplementing the piglets during the nursery phase are decrease in enteric problems, improvement in gut integrity (such as relationship villus height: crypt depth, mucosal thickness, and villus surface area), improvement in immune system responses (increase in levels of IgA) and subsequent improvements in performance (higher BWG). The Hilyses® can be used as a strategy to help the piglets by improving health and passive immunity and milk quality in sows, and directly affecting the innate immune responses, decreasing the pathogens contamination in the gut, providing nutrients with high digestibility and nucleotides.

References are available on request from catharina.nieuwenhuizen@barentz.nl

You can download the original article in both English and German here.